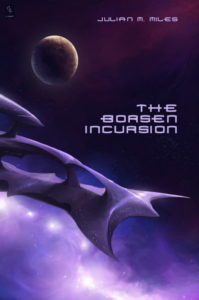 “This immense and intricate novel from British author Julian M. Miles is a space opera with spirit, and deserves a place on the bookshelf of every sci-fi aficionado.” – Renegade Revolution (For the full review, see the foot of this page.)

For five centuries, a unified Earth has been the centre, and ruler, of all it surveys: an empire that spans two thousand worlds. It has been unchallenged for three hundred years.

The Borsen use strange technology to strike down any opposition with terrifying ease. But their inexplicable reserve leads some to suspect they have a purpose beyond conquest.

For the first time in half a millennium, mankind is facing a dire threat. Centuries of military bureaucracy and entrenched arrogance lead to grievous losses. Even when miraculous new technology offers an upper hand, factionalism and megalomania arise to threaten those who use it.

A centuries-spanning tale of space warfare told from major and minor viewpoints: using over fifty pieces of carefully-crafted short and flash fiction, this book will take you from the start of the incursion to its end, letting you witness the war while revealing its impacts and revelations from every angle.

PS: The hardback has a full-wrap cover – 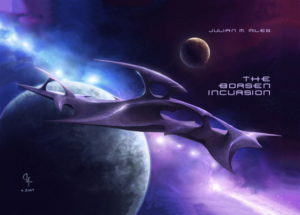 This immense and intricate novel from British author Julian M. Miles is a space opera with spirit, and deserves a place on the bookshelf of every sci-fi aficionado.
The Borsen Incursion is not the kind of book you’d encounter every day. Forget straightforward narrative: this is a network of short stories that paints a mosaic narrative across centuries of time and space, a unique and immersive way of involving the reader directly in what is an unimaginably huge series of events: the arrival of a hostile alien race in the future Unified States of Earth territories. The incursion of the Borsen army triggers a spate of momentous events; whole systems turn to warzones and battles spur on technological progression with many unintended consequences, the effects of which are felt over centuries.
Such large scale is difficult to translate effectively if limited to a few key character viewpoints, as with most novels. Few pieces of historical fiction set during the World Wars, for example, ever focus on the entirety of the events, usually picking out a few key events or factions to spin their tales within instead. The scale of the war as an entirety is something usually saved for vast tomes of analytical history books, to be looked at with a cold eye or risk making the emotional connections too shallow to care about. Or, in the case of games like Mass Effect, which manage to get across both large-scale warfare and emotion, too often the speed of the war is condensed into just a few years or decades and thus becomes unrealistic.

But here, the short story / flash fiction format allows for scale without sacrificing emotional connection or creating unrealistic timescales. We can comprehend the vastness of the three century event without feeling like we’re doing a cold reading. Snippets of characters’ lives – some explored in one tale and never to be seen again, others revisited over the spans of decades – give the reader something human, something uniquely passionate, to hold on to. At the same time, witnessing the progression of the incursion over time lends a horrifying sense of perspective and progression. At times I felt tremendous loss whilst reading of certain events, at others I felt brazenly hopeful at where things might lead. It often felt so immediate while reading that it felt similar to reading about current events.
Unlike with current geopolitical events, however, we get the privilege of being led through the entire incursion and witnessing the end resolution. It’s a satisfying adventure, and with the fantastic twists and turns along the way – characters diving in and out with their projects, their goals and their legacies – it ends like any good gourmet meal should: leaving you feeling utterly full yet still hopeful for the possibility of more one day (although I in truth would not wish for a continuation: the story is complete enough as it is).

At points the writing quality is overshadowed by the plot’s excellence and feels a little rushed, at other points it is simply stellar and keeps the same integrity as the overall concept does. Granted, there is a lot to keep track of; there are over fifty short stories contained within the volume as a whole, and what is particularly impressive is how so much of the personality of the recurring characters in particular is gotten across in so small a space, when compared to the average novel. Alpha Commander Jackson Spence is one character I realised I had a lot of affection for, and in only the first three paragraphs of his character introduction.
Also, the diversity of characters in this novel is fairly representative of what a universal community of people would look like, and the sci-fi mainstay of dominant male war captain is not the default here, instead commonly reserved for those characters in the book with a more old-fashioned, often to their detriment, outlook. The range of characters provides a broad perspective over the entire war, and it makes me happy with regard to some characters in particular, because prior to this, the only Native American space hero I knew of was BraveStarr, from the Eighties cartoon of the same name.

Space opera with spirit is perhaps the most comprehensive way of describing the book, and quite a literal one at that. With his background in paganism, Miles started as a fantasy writer, and the inclusion of spiritual elements is one that both defines and divines the novel – lending it a sharp creative edge and opening up an array of new avenues for it to follow. The best thing about the spirituality is that you don’t need to prescribe to any of it to follow or engage with the overarching story. There’s reality, evolutionary science, and ramped-up technology that can fill the gaps in the uncharted territory humanity now walks, but just as with the present day, this novel gives the reader the chance to fill those gaps with infinitely exciting new possibilities. Think the revelations of Mass Effect were cool, or those of the Aliens series, Prometheus, Neon Genesis Evangelion? Here, questions of sentience, of what constitutes life, of whether there’s anything more powerful out there, and the age-old doubt of whether humans would tear each other apart in the heart of darkness or build a bright future together, are all tackled masterfully within the context of a giant space war. Nothing more shall be said; this is one epic you have to experience for yourself.