Between the Thunder and the Sun 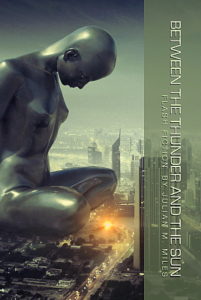 Bringing you stories of intrigue, action, love, and adventure from near and far.

The further our world and civilisations go from today, the stranger they could become, and the weirder things we could encounter. That’s the simple yet open-ended inspiration for my flash fiction. Over the past decade I’ve written and released flash pieces to several online outlets – the majority being for 365tomorrows – and they’ve formed the core of my annual anthologies. Those anthologies also contain a number of other short and flash tales, the ones that just arrive during each year.

This omnibus draws on my 2011-2021 catalogue of pure flash fiction work (those containing 25 to 700 words) that have not been published online, plus a few that were, but are no longer available. They’re appearing together for the first time, and have all been revised in some form – my writing has evolved over the thousand-plus stories I’ve written, and I’m reflecting that by ‘tidying up’ some work. In a couple of cases, I’ve applied the ‘I should have done it this way instead’ afterthought that occurred to me.

From alternate history, through dystopian and miraculous tomorrows, to the furthest reaches of mankind’s exploration of space, this collection gathers a diverse selection of my finest flash into a single volume for your entertainment.