A Place in the Dark 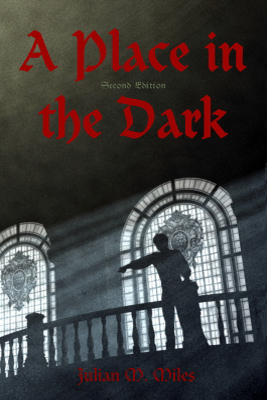 “It’s not often that a vampire tale such as this transcends the background detritus of navel-gazing romance so prevalent in the genre, but A Place in The Dark, from author Julian M. Miles, packs a real punch and doesn’t hold back. If you’re sick of current vampire fiction and related spinoff novels, this is most definitely the book for you, as it really sets the genre to rights.” – Renegade Revolution (For the full review, see the foot of this page.)

There are things out there you know nothing about, and would not believe even if you did. Luckily for you, most of these things are completely indifferent to your existence.

That wouldn’t stop them from tearing you apart in a heartbeat, were you to attract their attention. Fortunately for humanity, they spend most of their time and energies inflicting atrocities upon each other. The threats from their own kind are far greater than those posed by their prey.

From before the dawn of civilisation to the dusk of today, they have coexisted with you. A hidden, dysfunctional society that clings to a degenerate feudalism – modern life through a predator’s eyes.

This is the tale of one nightwalker’s journey amidst the patterns and intrigues that weave through centuries and affect countless lives.

PS: The hardback has a full-wrap cover – 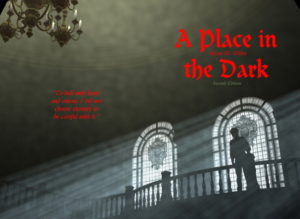 With the generation-spanning epic storytelling of Anne Rice and the intense kick-ass action of Hellsing, this vampire novel has a lot going for it. Enter of your own free will…
It’s not often that a vampire tale such as this transcends the background detritus of navel-gazing romance so prevalent in the genre, but A Place in The Dark, from author Julian M. Miles, packs a real punch and doesn’t hold back. If you’re sick of current vampire fiction and related spinoff novels, this is most definitely the book for you, as it really sets the genre to rights.

A Place In The Dark follows the life and times of Rafe, a nightwalker of ancient repute and many hidden names and histories, revealed slowly and in scattering form throughout the book. We start out and he’s lost in the woods, a mysterious hound accompanying him, and no memory of his life before. Then there’s a cart, armed bandits and the plot very quickly accelerates when he meets nightwalkers inside the cart and realises he is one of them, and has been for quite some time…

The format is that of a diary memoir, and it feels like listening to a firelight tale. This format really helps to keep the tension high throughout as needless things can be skipped – the narrative goes from one adventure or iconic event straight into the next, or has longer events broken up by interludes and detractions into what a particular word or phrase means. This is oftentimes quite necessary, because the author has properly constructed his own world, replete with language and customs. It is a fantastic thing to see a vampire novel that puts such commendable energy into incorporating the Romanian language into their unique terminology, instead of succumbing to the Western idea of ‘Dracula fiction’. The myths of nightwalkers existed in Eastern Europe long before that particular 15th Century voivode who inspired Bram Stoker even existed, and the terminology pays homage to that fact.

Here at Renegade Revolution we recently got the privilege of reading the second edition, which contains even more information and nice little extras from different characters that tie into the main narrative nicely. The whole novel, especially the later parts, traverses the globe and provides a nice commentary on human history and technological developments. It feels like some important points were made regarding data farming and surveillance – the whole context of which changes when looking through the eyes of one who regards humans as necessary fodder.

So there are many high points for mythology nerds, but it would be amiss to continue without mentioning the fact this book is hands down one of the most inventive and gory works of horror fiction I’ve read recently. Too many other novels do struggle with making grimness seem truly grim and frightening. But here we have no-holds-barred scenes of carnage and torture, even upping the ante on badass shows like Hellsing. I would dearly love to reveal some of the more vivid scenes, but these are best left to experience on one’s own. Suffice to say, the mechanics of having some of the iconic vampiric powers, like transformation, are thoroughly explored.

From a human perspective, the central character Rafe may seem incredibly evil, morally sunken and depraved. But taking into account his nightwalker culture, he’s a far more interesting and multifaceted character than he might at first seem. It’s not a simple matter of asking whether he’s a hero or an anti-hero. He’s subject to his own survival instinct and the desire to help those he cares about, and makes tactical decisions, but is also subject to emotions like rage or vengeance.

I would not want to meet him in a dark alley at night, but equally I can imagine that the average farm animal would not wish to meet me, a staunch carnivore, either. We’re a totally different class from each other, but if from the same species and in the same world, I imagine Rafe would be quite interesting to talk to.

All in all, Julian M. Miles has created something refreshing and intense, with a real sense of history and grandeur as a constant backdrop. It is well worth the adventure to invite this particular story in.